The Alaska Native Health Board (ANHB) is seeking a motivated individual to work with the ANHB management and policy team. The Legislative & Policy Advisor has the responsibility to provide policy research, analysis and advises ANHB on priorities for state & federal legislative affairs and related advocacy functions to support ANHB’s mission and vision.

For more information, please view the job description and application: 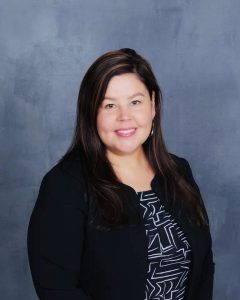 Anchorage, Alaska – The Alaska Native Health Board (ANHB) Board of Directors and Executive Committee selected Chief Operating Officer Alberta (Aakaq) Unok as the organization’s next President and Chief Executive Officer. In her new position, Alberta will oversee the day-to-day management and operations of the organization.

Over her ten years with ANHB, Alberta has been a successful member of the executive leadership team, facilitating statewide meetings and advocating for Tribal health needs. Alberta, who joined ANHB in 2011 and most recently served as Chief Operating Officer bringing experience with advocacy and program development to the position. In 2016, she was the recipient of the National Impact Award from the National Indian Health Board. Before joining ANHB, she was the lead program administrator in the development of the federally-recognized Behavioral Health Aide Program for the Alaska Native Tribal Health Consortium.

“We are grateful for Alberta’s experience with ANHB and steadfast dedication to our organization,” said Andrew Jimmie, ANHB Board of Directors Chairman. “The Board chose Alberta for her ability to continue fostering a culture of respect and improvement while moving forward with strategic priorities and advocacy for the Alaska Tribal Health System.”

Originally from Kotlik, Alberta is Yup’ik, a shareholder of Calista Corporation and a Tribal citizen of the Village of Kotlik. She holds a Bachelor of Science and Master of Business Administration from Alaska Pacific University. She is active in the community and currently serves as the technical advisor for the Department of Health and Human Services Secretary’s Tribal Advisory Committee and Indian Health Service Tribal Self-Governance Advisory Committee. She has dedicated her work to fostering constructive communication with government agencies, elected officials, industry stakeholders and fellow advocacy organizations to raise awareness of Tribal health issues by promoting meaningful dialogue on strategies for effective policy changes at the state and federal levels.

On accepting the position, Ms. Unok shared, “I am so honored to be granted this opportunity to continue to work with Tribal representatives from across the state and ANHB’s partners. I believe whole heartedly in the strength of the Alaska Tribal Health System and ANHB’s advocacy efforts.”

Founded in 1968, ANHB is a private, statewide, nonprofit organization with a mission to promote the spiritual, physical, mental, social and cultural well-being and pride of Alaska Native people. ANHB is the voice of the Alaska Tribal Health System. 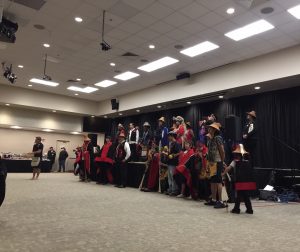 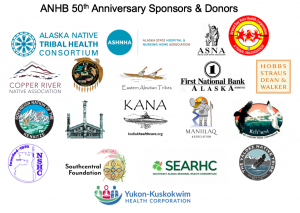 
A Renewed Era of Federal-Tribal Relations: White House released a report outlining some of the successes of this Administration while working on behalf of Tribes

Date Posted: January 9, 2017       Categories: News
The Obama Administration has made historic progress over the past eight years in improving the nation-to-nation relationship between the United States and federally recognized Tribes. Together, the Obama Administration and Tribal Nations have accomplished shared goals and achieved milestones that upheld self-governance and self-determination – the foundation for prosperous and resilient tribal nations.

Today, the White House is releasing a report outlining some of the successes of this Administration while working on behalf of Tribes. The report sets a baseline of progress for Tribal Nations to reference in their ongoing work with the federal government, and outlines the priorities that the White House Council on Native American Affairs (WHCNAA) will continue to work on based on Tribal leaders’ recommendations.

While the Administration and Tribes have partnered for historic achievements, there is still much more to do. President Obama signed Executive Order 13647 on June 26, 2013, establishing the WHCNAA, which represents a path to a more effective federal government for Indian Country, bringing together federal Departments and Agencies from across the Executive Branch to “break down siloes” and coordinate for more effective programs.

As demonstrated over the past eight years, when Tribal Nations and the federal government work together in a true spirit of nation-to-nation cooperation, momentous progress can be achieved.

U.S. Senators John Hoeven (R-N.D.) and Tom Udall (D-N.M.) today issued the following statements after being elected Chairman and Vice Chairman of the Senate Committee on Indian Affairs for the 115th Congress.

“I am honored to serve as the Chairman of the Senate Committee on Indian Affairs and look forward to working with Vice Chairman Udall and members of the Committee to pass legislation that helps improve the lives of people across Indian Country. In our roles, we will address the issues of job creation, natural resource management, health care, education, public safety and housing in Indian communities,” said Chairman Hoeven. “We will also make it a priority to promote economic growth. Jobs and economic growth are the priorities that will help Indian families, communities and businesses succeed.”

“I am enormously honored to become the Vice Chairman of the Senate Committee on Indian Affairs, a role that will strengthen my ability to fight for and defend the sovereignty of New Mexico’s 23 tribes and all Native American communities,” said Vice Chairman Udall. “With the Indian Affairs Committee’s proud tradition of bipartisan cooperation in mind, I am very much looking forward to working with Chairman Hoeven and all our committee members to help secure progress for Indian Country. Throughout my career, I have been committed to working alongside tribes to uphold our trust responsibility. The U.S. Senate has a duty to support tribal communities in their work to build sustainable economies and good schools, provide quality health care, maintain access to clean air and water, and protect the deep Native American connection to culture and tradition. Native Americans have faced, and continue to face, great challenges and injustices – and while we have made progress, it is abundantly clear that we have much work to do to improve government-to-government consultation with tribes and to ensure environmental justice. I am proud of my long record as a strong defender of Native American rights, and this new position will enable me to work more closely with tribal communities in New Mexico and across our nation.”

“I want to congratulate Chairman Hoeven and Vice Chairman Udall on their elections,” said former committee Chairman John Barrasso. “I look forward to working closely with them both, and with all the committee members, to pass legislation that will empower tribal communities and will strengthen the government-to-government relationship the United States shares with tribes.”

“I look forward to working with Chairman Hoeven and Vice Chairman Udall to ensure that our nation’s trust and treaty responsibilities are upheld across all of Indian Country,” said former committee Vice Chairman Jon Tester. “I am confident that during this session of Congress the Senate Indian Affairs Committee will continue its long history of working across the aisle to promote tribal sovereignty and strengthen economic opportunities, health care and education for all Native American and Alaska Native families.”

The National Indian Health Board (NIHB) convened over 170 Tribal leaders from across the nation to establish united Indian health priorities for the new Congress and Administration at the Native Health Presidential Transition Summit on Thursday, December 8 in Washington, DC. 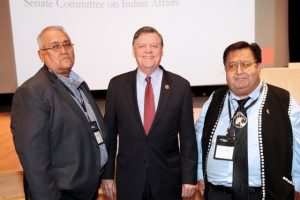